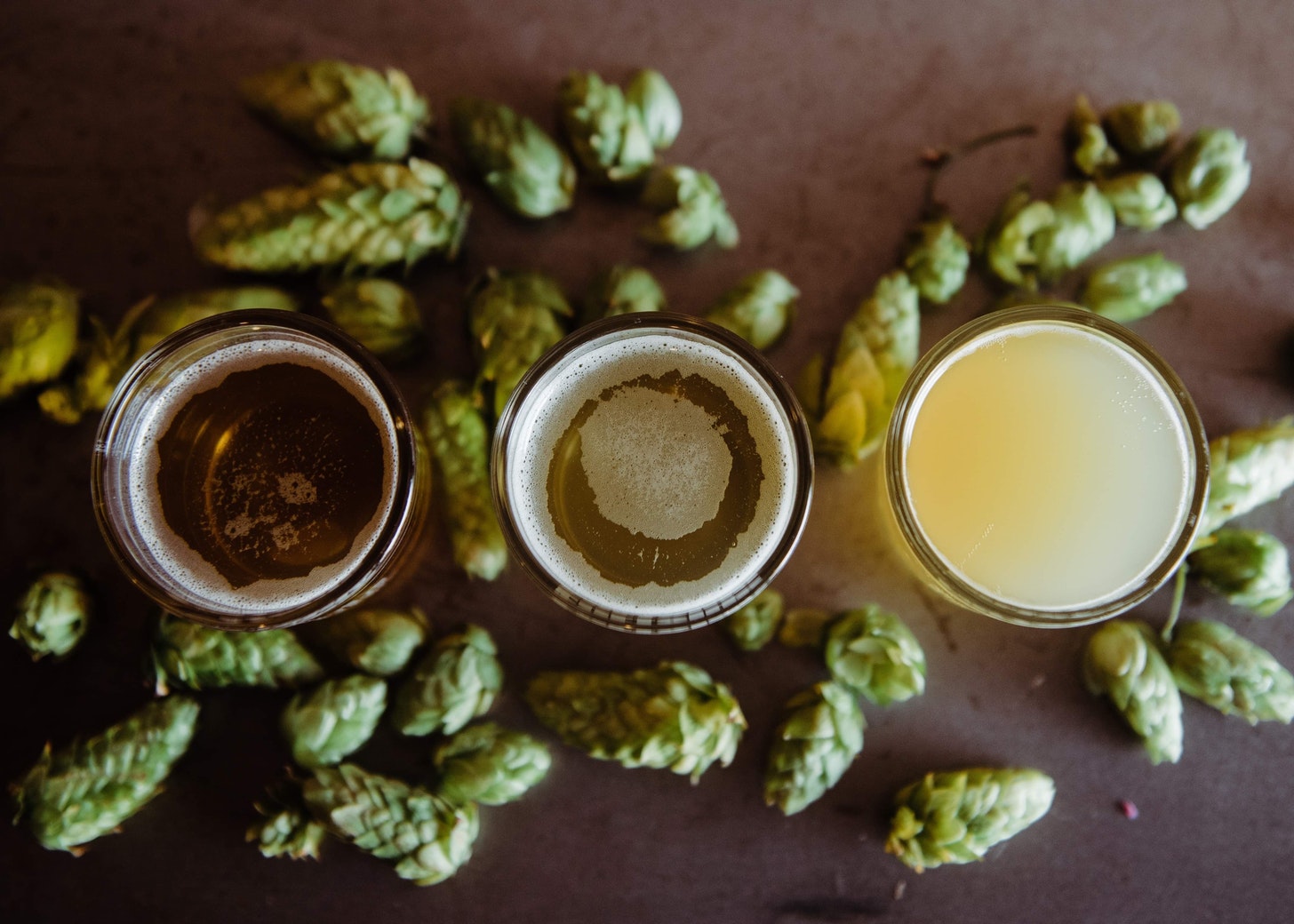 Admittedly, we did not know very much about dry hop extraction rates nor saturation points (DHSP from now on). Consequently, we have spent considerable time digging through the literature and reading about the topic. Below, we present our take (or synthesis) on the dry hop saturation points – what it is, the factors that influence DHSP and possible ways to help brewers reduce the hops required to reach saturation. We have referenced this post for those interested in the topic, who want to know more, and don’t mind reading the literature.

What is a Dry Hop Saturation Point?

Dry hopping involves the extraction of volatiles and essential oils from hop flowers into beer at low temperatures. When homebrewing, brewers can either hop their beer during fermentation or after, adding the aroma and flavours present in essential hop oils to the beer.

The relationship between the amount of hops used in dry-hopping and the level of essential oils ending up in your beer is not linear. As brewers add more hops to the beer, the oil extraction rate decreases. At some point and when the system (beer) is saturated, adding more hops does not seem to have any impact on the flavour and aroma profile (though there is evidence that beer chemistry continues to change).

The point at which adding more hops does not impact the beer profile is called the “dry hop saturation point”.

The DHSP describes the point at which adding more hops has no further impact on beer hoppiness. This definition means that we can express DHSP as the amount of hops (in Grams or Ounces) per volume of beer (litres, gallons). The DHSP is vital for brewing beer (styles) that require maximum levels of the desirable compounds found in hops. DHSP is extremely important for brewers as hops come with high cost. Dry hopping (especially when using dried hops) also reduce the final beer volume as the hop matrix soaks up the beer and is often irretrievable.

You can understand that knowing DHSP and the mechanism(s)or factors that drive extraction will help brewers decide on the most economical recipe and process. For this reason, there is an emerging body of scientific literature that looks into DHSP, extraction efficiency and impact on beer chemistry. Below, we will describe some of that work.

As indicated earlier, the efficiency with which aromatic and flavour compounds extract from hop flowers diminishes as the hop rate increases. This relationship, however, is only relative as it applies to one set of conditions (one type of hop matrix, one beer style, extraction time etc.). The question, therefore, is: what other factors drive extraction efficiency? Some of these factors are listed below:

However, none of these factors takes account of the medium itself (beer) and specificity towards the hop compound! In other words, does the hop transfer rate apply for every (un)desirable compound and does the beer type matter?

A recent paper described a systematic characterisation of volatile transfer during dry-hopping in different beer types (Haslbeck et al., 2018). The authors used beers, with increasing alcohol levels, in a dry-hopping experiment and assessed the transfer level of various hop compounds. They found that dry-hopping conditions can influence levels of hop oil components in beer. While they found that higher dosage increases hop oil concentration, this increase varied in magnitude between compounds.

While this work is quite illuminating and illustrative of the complex interplay of multiple physiological and chemical factors, it does not talk much about the process and dry hopping approach. Another interesting paper aimed to determine whether using a 1-step or a 2-step dry-hopping method makes a difference in extraction efficiency.

To test whether the number of dry-hopping steps had an impact on extraction efficiency, they made several comparisons. Firstly and in a pilot brew setup (80–100 L), the authors used a base beer (un-hopped) in a dry hopping experiment in which they increased the total hop rate (386, 772, and 1544 g/ hL). For each rate, they took a single-step approach (using all the hops) and a two-stage approach (splitting the total hop amount in half). After treatment, the authors carbonated the beers and subjected each batch to sensory evaluation and chemically analysis.

Interestingly, the results suggested that, as expected, increasing hop rates resulted in higher essential oil or compound levels. These, in turn, led to an increased flavour and aroma profile. But did they find any differences between 1-step and 2-step dry-hop approaches? The answer to that question is “yes”. Generally, the two-stage process yielded higher levels of compounds that impact flavour and aroma profiles. Importantly, their sensory analyses identified differences between beers, consistent with the chemical analyses.

What does that mean?

In principle, and when aiming to reach the DHSP, you may find that a two-stage approach can help you reduce overall hop usage. While the research indicates that this may be the case in their experimental setup, it is important to remember that a trial with another beer style may throw up different results. It is also not clear what increased extraction efficiency means in economic terms. What will the actual savings be?

The takeaway from their work, however, is profound. If a two-stage approach is more efficient in terms of hop extraction, would a three or four-stage extraction work even better? Would a play around with the ratios (e.g. using 1/3 and then 2/3 of your hops) make a difference?

While we will not unambiguously promote two-stage dry hopping to the homebrewing community, these results give food for thought. Another recent paper (Hauser et al., 2019) investigated the levels of essential oils left in hops after dry hopping. They found that for most compounds, significant levels remained present, possibly sufficient for subsequent dry-hopping steps.

If true, their conclusions mean that spent hops can be processed and re-used in the first-stage of dry hopping. If a brew schedule allows it, such a strategy could lead to significant savings by increasing hop utilisation.

We hope that you enjoyed reading about hop extraction rates. Researching and writing it made us incredibly thirsty.

Saccharomyces: Data Survey Reveals Untapped Potential
Kveik Yeast: Sweet Tasting Thermo Tolerance
Wild Yeasts to Take Beer to Another Level
Beer Malt Quality: Where to go from here?
Homebrewing Equipment and Resources to Start Brewing Beer
Viable Yeast Starter? Viability Stains Will Tell
Buying Your Homebrew Equipment: Hindsight is 20/20
Microscopy for Homebrewing Projects
Isolating Wild Yeast for Homebrewing Beer
How to Bottle and Condition Your Beer
How Homebrewing Saves Money and Generates Value
How to get into Homebrewing Beer
Brew an Amazing Beer at Home: Its Easy
Water Quality Affects Beer Taste and Production
Practices and Styles in the Craft Beer Brewing Industry
How much time does brewing your own beer take?
Equipment a Successful Homebrewery Should Have
Homebrewing 101: How to tell your beer is infected
How to Make a Yeast Starter and Better Tasting Beer
A Guide to Cleaning & Sanitizing Homebrewing Equipment
How to Make Your Beer Taste Delicious: Tips for Homebrewers
Start Homebrewing at Home? Avoid These Mistakes
pH-ew: Measuring beer pH when brewing at home
What’s the Deal With Beer Fining Agents?
Brewing Your Own Beer: How Does Yeast Work?
Why Malt is a Key Beer Ingredient
How to Diagnose Yeast and Bacterial Contamination in Your Brewed Beer
Follow us on Facebook
Follow us on Twitter
Follow us on Pinterest
Follow us on Instagram