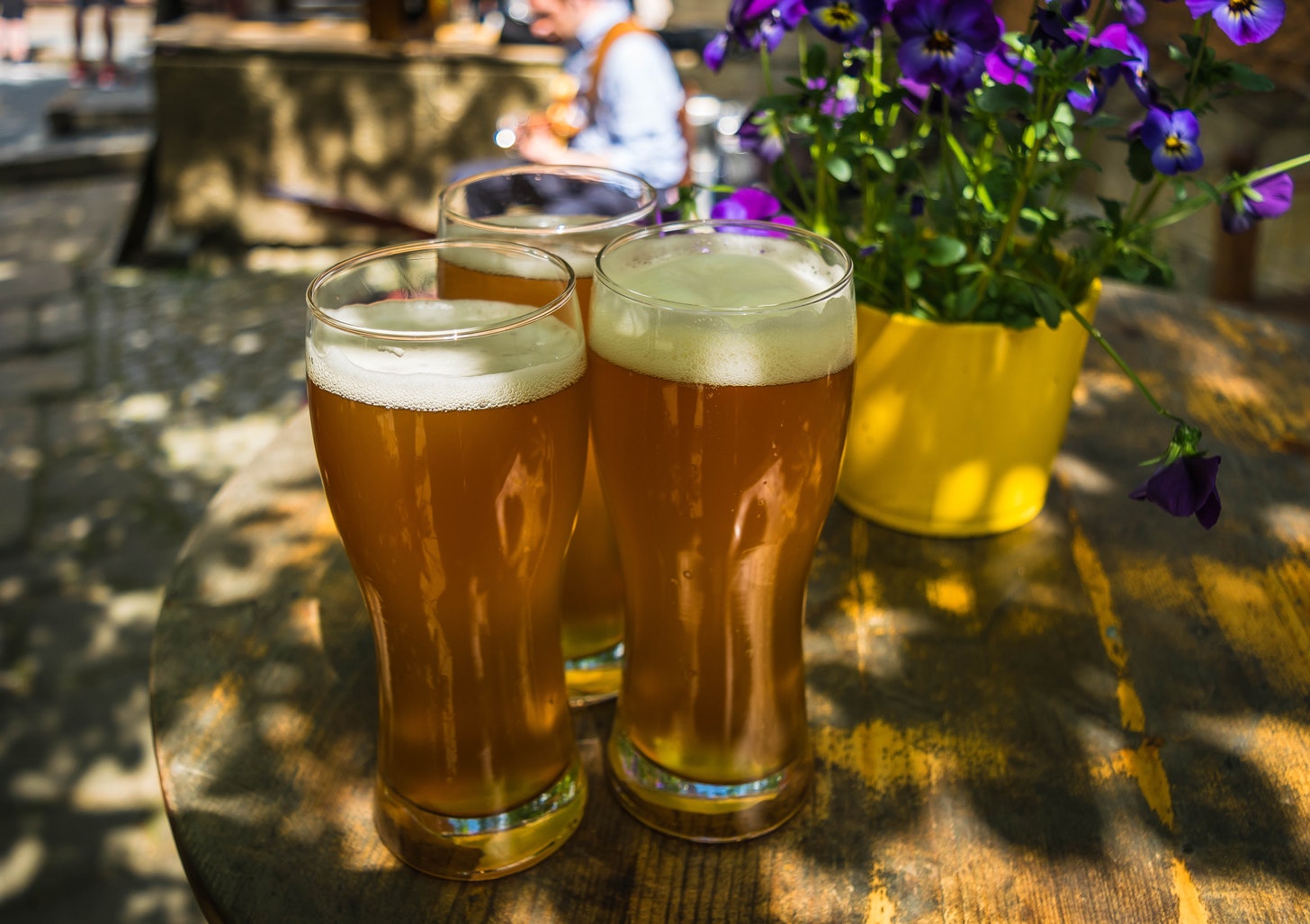 In this article, we will spend some time talking about yeast. When brewing your own beer, you can’t avoid using them. These simple Eukaryotes are part of a diverse and extensive group of organisms classed as Fungi. Luckily, some yeast species have the unique ability to convert sugar into alcohol, powering delicious beer making.

For thousands of years, our ancestors have used yeast to produce a great variety of foods and drinks such as Kimchi, beer and wine. With this article, we are stepping into the world of yeast in contemporary brewing.  Let’s get that brew party started!

Yeast, the sugar fungus for beer

The scientific name for yeast is Saccharomyces cerevisiae. Saccharomyces means “sugar fungus” and cerevisiae means “for beer”. Yeast is the common word used for S. cerevisiae, but that does not mean that all yeasts have the same name or produce alcohol. Most yeasts can ferment sugars but have different scientific classifications and applications. For this article, however, yeast will refer to S. cerevisiae, the sugar fungus for beer!

Yeasts are single-celled organisms that you can find everywhere. Yeast needs sugar and other nutrients to grow, so we can find it in abundance on ripe fruits, nectar or any other material that serves as a sugary snack. It will not surprise you that people have used spontaneous fermentation practices (because of natural infection and colonization) to produce wine and beers for thousands of years. Yeast cells take up and extract energy from simple sugars that they take up from their immediate environment. Yeast can generate this energy in two distinct ways.

One way is to convert sugar into carbon dioxide and water using oxygen. This is the most effective strategy, yielding heaps of energy from only a few sugar molecules. This chemical reaction is identical to those carried out in our body and drives robust growth in yeast. Keep in mind that growth means two things here: cell division (and an increase in the number of yeast cells) and cell growth (an increase in cell size or content). The distinction is not relevant here but becomes more important when we talk about yeast performance and extract loss.

When brewing your own beer, you make use of both conversion processes in yeast. In the early stages of brewing, we want the yeast to grow vigorously and stock up on energy for fermentation in the later stages. We, therefore, make sure that we either add a significant population of yeast cells that have been growing robustly (we call that a ‘starter’) and/or we make sure that our wort (the beer before fermentation) has plenty of oxygen when we start our brew. This oxygen will allow the yeast population to build up before fermentation kicks off (when all oxygen has gone). Fermentation starts when yeast has used all the oxygen in the wort. The production of carbon dioxide gas and its release from your fermentation vessel is the telltale sign. Success!

Brewing Your Own Beer: When does fermentation stop?

Fermentation can stop for several reasons. I have listed some here below:

1- Your yeast has used up all fermentable sugars. No food, no play.

2- The yeast has consumed the nutrients it needs for fermentation. Yeast cells use a variety of other nutrients for growth and fermentation, many of which are already present in your wort. They can, however, run out and stop your fermentation.

3- Yeast can no longer tolerate alcohol or other fermentation byproducts. Too much alcohol is not good. The same is true for yeast cells. Yeasts can only tolerate a relatively low level of alcohol. Tolerance levels vary wildly between strains and is a defining feature when selecting your yeast. In the vast majority of recipes and beer styles, alcohol levels will be below those tolerable to your yeast strain. Besides alcohol, scientific studies have implicated CO2 concentration and pH in the inhibition of fermentation, both of which change during brewing.

A case for healthy yeast starters

Provided that you started your brew with a healthy yeast population and oxygenated wort, fermentation will end because your yeast has converted all sugars. When you started with a low yeast cell count, or you aim to create a high alcohol brew, the other factors may come into play. We would always recommend using a healthy yeast culture as a starter when you are in doubt about your yeast. Yeast cells will burst open after they die and if this happens early in your brew, it may give your beer off-flavours. you can read more about starters and yeast health here.

Besides simple sugars, yeast can also convert other compounds in your beer. There is considerable variation between yeast strains and you find that each strain can produce its own set of metabolites. These metabolites contribute to the overall flavour profile in two ways. First, they will create compounds that give you beer flavour (good or bad). Second, yeast will remove compounds from your wort, impacting flavour and texture. Again, each yeast strain will have its own capabilities and character. This is one reason we only use some yeasts for specific beer styles.

Now you know the few rules you may have to live by when brewing your own beer. Yeast does the hard work, not you. The brewers’ job is to keep unwanted bugs out of the beer and make sure that yeast health and fermentation conditions are optimal. Most recipes and processes we commonly use will achieve that. Once established, your interest in brewing styles, processes, and practising will do the rest.

You need not be an expert to succeed in brewing your own beer. Cleanliness, diligence, good ingredients and yeast will do the trick!

Here at BrewingBrowser, we want to eliminate any barriers that stop you from embarking on your brewer journey. If you want to learn more about microbiology, microscopy or brewing in general, please check out our Homebrewing-101, Guide or homebrewing equipment sections on our site (brewingbrowser.com).

We recently submitted our blog to the Feedspot team. After review, we have entered their Top 45 list of homebrewing blogs at Nr 25! Thank you Feedspot!

Saccharomyces: Data Survey Reveals Untapped Potential
Kveik Yeast: Sweet Tasting Thermo Tolerance
Wild Yeasts to Take Beer to Another Level
Beer Malt Quality: Where to go from here?
Homebrewing Equipment and Resources to Start Brewing Beer
Viable Yeast Starter? Viability Stains Will Tell
Dry Hop Extraction Rates & Saturation Points
Buying Your Homebrew Equipment: Hindsight is 20/20
Microscopy for Homebrewing Projects
Isolating Wild Yeast for Homebrewing Beer
How to Bottle and Condition Your Beer
How Homebrewing Saves Money and Generates Value
How to get into Homebrewing Beer
Brew an Amazing Beer at Home: Its Easy
Water Quality Affects Beer Taste and Production
Practices and Styles in the Craft Beer Brewing Industry
How much time does brewing your own beer take?
Equipment a Successful Homebrewery Should Have
Homebrewing 101: How to tell your beer is infected
How to Make a Yeast Starter and Better Tasting Beer
A Guide to Cleaning & Sanitizing Homebrewing Equipment
How to Make Your Beer Taste Delicious: Tips for Homebrewers
Start Homebrewing at Home? Avoid These Mistakes
pH-ew: Measuring beer pH when brewing at home
What’s the Deal With Beer Fining Agents?
Why Malt is a Key Beer Ingredient
How to Diagnose Yeast and Bacterial Contamination in Your Brewed Beer